Frank Beban, one of British Columbia’s leading timber baron’s, built his mansion on 160 acres of rolling farmland three miles north of Nanaimo. In 1953 the estate was sold to the city of Nanaimo for use as a park and eventually became the Nanaimo Tourism headquarters in 1997. Prior to becoming the Nanaimo Tourism building, the main floor served as a daycare centre. The operator of the facility often heard stories from preschoolers about an oddly dressed child playing with a red rubber ball. Many of the children made their invisible playmate the subject of their drawings and the operator was struck by the similarity of the pictures.

It was first thought that the ghost was a little girl. It was later realized that it is more likely one of the Beban’s Chinese servants â€“ a young boy who died in the house. The house is still believed to be home to many spirits and several staff members have reported bizarre encounters. The boiler room and old servant’s quarters leave many feeling uncomfortable. Strange messages left on the answering machine, water taps turning on and off and doors mysteriously opening and closing are just a few of these unexplained occurrences. Although the staff seems undeterred in working in the building, with very few exceptions, no one will remain there alone in the evening.

The investigation at B.C.’s Beban House was the initial investigation for both Christina and Susan as members of a paranormal group. They shared mixed emotions as they headed to the house that night.

Christina: “Since I was new in the Paranormal Group, and I didn’t have any previous experienceI wasn’t too sure about what to expect. I knew that there had been a lot of paranormal activity in the houseso I was sure to expect something to happen.”

Susan: “To tell the truth, I didn’t expect anywhere near the experience we got at the Beban House. I figured we would have maybe one or two incidences, but we had so many documented by the time we left the house that I was truly amazed and thrilled”

The spirit haunting the Beban House was restless on the night of the investigation nearly two years ago. He made his presence known in a variety of surprising ways. One of the most thrilling for the group was the appearance of orbs around the house. These orbs were captured on video and film. Check out the images below taken by Christina. You’ll see some interesting orbs, as well as a before, and after of some objects that moved! Christina says, “Seeing the pictures and the little bits of paranormal activity captured in them was exciting for me, especially since I was the one who took the pictures in the first place. I had never experienced anything like that before.”

Video and photo’s on the site below:
http://www.screamtelevision.ca/

Vancouver Island Paranormal Society was kindly invited to stay the night at Beban House and although the night was an interesting one the findings are inconclusive and evidence is still under review.  We have been dragging our heels due to other commitments but I wanted to at least thank Nanaimo Tourism for allowing us to investigate.

The night was one of mixed experiences, there where for of us investigating and we split into 2 pairs,  husband and wife teams for most of the night.  In the basement room that on first appearance was a small storage closet but we learnt was the bedroom of the servant boy we did some calling out,  we had a red ball positioned on the book shelf as we had hear that a ball had been heard bouncing in the house,  we had a locked off camera on that ball recording to a laptop.  During the calling our my wife felt cold on the lower right leg which was close to the closet wall,  she also thought she saw a shadow of a bot crouching,  we had watched the ScreamTelevision stories several times the night before so we remain skeptical.

Whilst we were in this room,  K and C were in the larger room with the long table in the basement,  they could hear us and we could hear them calling out and they reported footsteps and creaking moving toward and then around the back of them as they called out and I will ask them to write personal accounts of these experiences.

We moved into this room as well and continued calling out but no more occurred until we heard loud noises and muffled voices from the porch,  when we investigated it turned out to be a young couple taking shelter whilst waiting for a bus!

We setup other experiments,  a pile of toys including a toy train at the foot of the basement stairs:

Trigger objects in the basement at the foot of the stairs.

We have no evidence that these were affected in anyway.  We have 3 hours of locked off camera showing the ball in the middle pulsating different colours,  thats not paranormal,  just normal.

We also set the ball up on the stairs and left it there for the duration of the night and for the living occupants to put back in the boys closet the next day,  the locked off camera also gives no evidence that this was moved:

Red Ball on the stairs to the basement.

We spent time taking many pictures and holding may vigils including a session of table tipping which seemed to effect some of our equipment.  The EMF did spike whist on the table away from all of us whilst we were table tipping.

He is slow on his feet and loves to take mid-morning, afternoon and evening naps, but Slater seems to have caused quite a commotion at Beban House since his arrival.

The family pet now calls the Nanaimo Tourist Information Centre home, but his owner fears the cat has stirred up the building’s ghostly past. Employees at the Nanaimo Tourist Information Centre in Beban Park are familiar with the buildings haunted history. But it was only recently that they started to take it a little more seriously. Recurring incidents left them with chills down their spines and prompted them to contact the Vancouver Island Paranormal Society to investigate their ghostly suspicions.

Mark Drysdale, executive director of Tourism Nanaimo, says he’s not convinced there are ghosts roaming the rooms and halls of the historic building. He doesn’t even believe in ghosts. But after moving his cat into the building, strange things started to happen with no good explanation. Co-worker Amanda Envoy shares Drysdale’s practicality, but they both figured it couldn’t hurt to seek the opinion of a professional ghostbuster.

Rob Turner with the Paranormal Research and Investigation Group is still reviewing the evidence they collected in Beban House on the night of July 4. Envoy is eager to find out the results, even though she passed up on the opportunity to sleep over with the ghostbusters while they conducted their research. She’s already spooked enough and didn’t think trying to meet and greet the ghosts, if there are such a thing, would be in her best interest.

“Lets just say if ghosts do exist, then there’s one here,” Drysdale said with a laugh.

Beban House is one of Vancouver Island’s most well-known hauntings, which was even featured on the television series Creepy Canada. 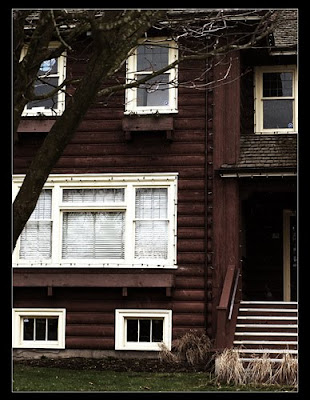 Before becoming Nanaimo’s tourism building the top floor was used as a daycare. The operator of the facility often heard stories from preschoolers about an oddly dressed child playing with a red rubber ball. It was later realized that it is more likely one of the Beban’s Chinese servants, a young boy who died in the house.

Drysdale has heard all the tales, but it wasn’t until a few unexplained incidents got his wheels turning. Doors and windows he had locked were opened. Doors he left opened were locked. A vital key went missing and then reappeared weeks later. And Slater who was locked in a room over a weekend was sitting in the foyer on the following Monday. It’s a mystery because the door to his room was still locked and there was no other way out.

Drysdale called the security company a few times to check to see if the alarms had been set off at any time or if they had detected any movements inside the building. The security records came back clean. That’s when the tourism team decided to call in the experts.

Even when Drysdale and Envoy are in the office all alone, they never really feel alone. It’s not that they feel like someone they can’t see is staring at them. But rather, there’s a presence of someone else in the room, on the stairs or in the corridor. Despite the eerie feeling, they don’t believe the ghosts, or spirits, to be evil.

“It all seems to be quite harmless,” said Envoy. “But it still creeps me out.” 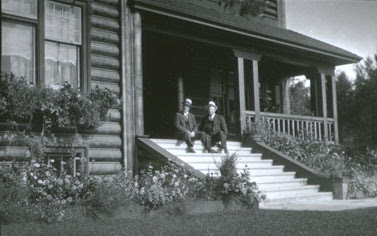 The Beban house is a beautiful home that was built by Frank Beban, British Columbia’s leading timber baron. A mansion built on 160 acres of land, 3 miles north of Nanamio. In 1953 the city of Nanamio purchased the estate and eventually in 1997 it was turned into the Nanamio Tourism Headquarters. Through out the years before the estate became the headquarters it also served as a daycare centre, which is when it seems stories started to come to life by the young children. Children claimed that there were other children that dressed differently hanging out with them playing with balls of their own.

Eventually after some research of the daycare providers it was discovered that children once resided in this estate and even more info came out that they were the Chinese servant’s children to the original owner Frank Beban. A young Boy has said to have died in the house of an accidental death.

After several investigations by ghost hunters and the curious there have been numerous accounts of weird and unexplained happenings, Psychics claim that there is more than the spirit of the little boy. The unexplained encounters have been recorded as water taps turning on, messages left on the answering machines and doors mysteriously opening and closing. Not to be left out is the strange eerie feeling of being watch when in the basement.

Nanaimo’s Beban House has become a well-known haunt in the Harbour City, with stories of faucets turning on by themselves and unexplainable sounds.

Lee Mason, a former tenant of the old mansion, recalls hearing a ball bounce down the stairs while she worked late at night – but thought she imagined it when she couldn’t find the ball. While former Tourism Nanaimo executive director Mark Drysdale still can’t explain how his cat escaped a locked room at Beban House, let alone how it failed to set off the building’s alarms.

“It’s a very, cool, cool old house with lots of history and if it had some ghosts, all the better for it,” he said. “I don’t think there’s any question that Beban was and probably still is the most well-known haunted establishment in Nanaimo.”

The log house was built in 1930 by Frank Beban, a wealthy sawmill owner who owned 160 acres of land at North Field. The $25,000 mansion is considered a rare example of rustic-style architecture and is protected under the municipal heritage designation bylaw.